The numerous mainstream media articles on the NBN (and particularly the comments sections) are invariably littered with statements like “Wireless is the future”, “Everyone knows fixed lines are dead”, “fibre optics are being made obsolete” etc etc.

And no-one more than I would love that to be true. I’m sure we all would. The thought that we could obtain superfast data speeds without the need for wires is a tantalising concept. Unfortunately, it’s just not possible for the majority of users in urban areas. That’s not to say wireless networks won’t continue to improve. Of course they will. But they will never approach the current or future speeds possible via fibre-optic cables. Wireless towers/base stations themselves are connected to the broader internet via fibre-optic cables.

Statistics from the ABS reinforce the fact that fixed line networks continue to do the “heavy lifting”, with no shift towards mobile networks.

Wireless is a great complementary technology for deployment alongside fast fixed networks, and is also useful for delivering broadband to a small number of users in remote areas. But it is incapable of doing so in densely populated urban areas.

Let me make one fact absolutely clear from the beginning: Despite what you may have read from certain clueless commentators, there is not a single country or telecommunications company anywhere in the World that is attempting to replace fixed networks with wireless in urban areas, or even planning to do so in the future.

Commercially, fibre-optic cables are being used to carry data at speeds of about 2 Terabits per second (Tbps). Experimentally, trials are now achieving over 69Tbps over a single fibreoptic strand.  (A Terabit is 1,000 Gigabits or 1,000,000 Megabits).

While the NBN will not be equipped to deliver such massive speeds initially, like all fibre-optic networks it is highly upgradable should greater speeds be required in the future. Speed increases only require upgrading of the transmission equipment with the fibre itself being unchanged.

Current 3G and 3.5G wireless networks (eg: Telstra NextG) offer theoretical speeds of up to 42Mbps. However, practically that network falls to a maximum of about 8Mbps, even under ideal conditions. Experimentally the 4G/LTE Advanced consortium is achieving about 1Gbps (per cell), as is the competing WiMax consortium.

So let’s compare wireless and fibre, with all speeds converted to Gbps:

As it currently stands, fibreoptics are achieving speeds that are 250,000 times faster than wireless. In the experimental stages,  fibre can carry 69,000 times more data than the entire bandwidth delivered by a wireless tower!

Speeds quoted for wireless networks are per cell, not per user. The total speed must be divided amongst all the users on that cell. So unless a user has their own personal cellular tower, the quoted speeds can never be achieved. For example, if 100 people are sharing a 1Gbps wireless network, they will each only obtain 10Mbps.

Topography, distance and other obstructions:

While data travels fast and essentially unobstructed through the glass of fibre-optic cables, the same is not true of wireless. Every obstruction along the way obstructs wireless data. From buildings, to hills, to trees, to rain. Even the air itself slows the effective speeds we can achieve wirelessly. These are unassailable limitations of the technology and they are one of the major reasons why “42Mbps” wireless networks usually operate at a tiny fraction of that speed.

Clearly, there is no hope for wireless to offer speeds approaching current fibre-optic technology, let alone fibre speeds which are under development.

They say a picture tells a thousand words, so here are several thousand, comparing the speeds achieved using a fibre NBN connection to those using Cable, ADSL and 3.5G wireless networks: 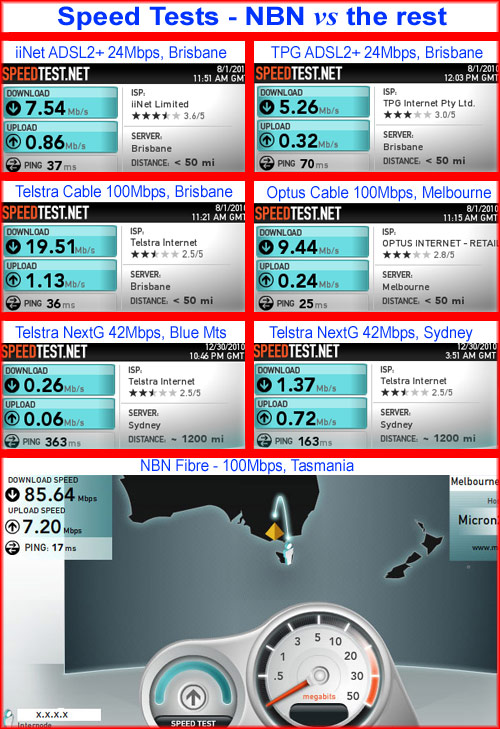 The comparison above clearly demonstrates the practical limitations of the various technologies.

Below is a graphic showing the effect of distance, which is particularly important in a large country such as Australia: 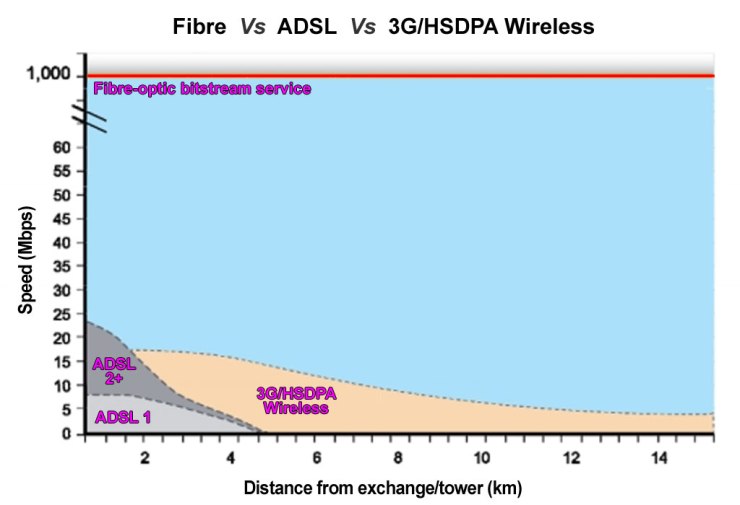 So why does it matter how much spectrum we use? Can’t we just add more? Well, no. Spectrum is a finite resource, which is already being stretched by the low volume of data being transmitted over mobile networks. It is also used by numerous other services, such as radio and television broadcasting and other radio traffic, which reduces the amount that can be allocated to wireless broadband services. The United States Federal Communications Commission chairman has stated that wireless broadband is already “in peril” due to spectrum shortages, while the CEOs of Vodafone and RIM (Blackberry) have stated that wireless broadband is reaching crisis point. Meanwhile, industry experts have advised that the spectrum shortage will be debilitating by 2013. And all these warnings are just assuming wireless broadband remains as a low volume complement to fixed broadband, not as a replacement for it. Even if additional spectrum is allocated to wireless broadband services, there simply isn’t enough radio spectrum in existence for wireless to approach fibre-optics.

Even if the spectrum issue could be overcome, for wireless to deliver superfast broadband to all of Australia it would require a huge increase in the number of mobile phone towers, and we all know how popular they are!

Australia currently has about 10,000 mobile phone towers across the country. To build a 4G/LTE Advanced network that could achieve a similar level of performance to the fibre-optic NBN, we would need to build approximately 75,000 additional mobile phone towers (Assuming 10M premises, 1Gbps per cell, 6 cells per tower, delivering 100Mbps to 50% of premises simultaneously).

Of course, all of those towers would have to be connected using fibre-optic cable.

There is a perception that everyone is changing to wireless, but they’re not. They are adding it. According to the Australian Bureau of Statistics, the number of mobile broadband internet connections grew by ~40% in Australia between 2009 and 2010. But the total amount of data downloaded over the wireless networks actually fell, despite the greater numbers. Conversely, the amount being downloaded over fixed networks is still increasing by about 50% every year.

South Korea, a country that already has a 100Mbps fibre-optic NBN, has announced that they are spending $US26bn upgrading their fibre network to a speed of 1Gbps, to compliment their WiMax (4G) wireless broadband networks.

Just as you can’t replace a regular oven with a microwave, you cannot replace a fast fixed network with a wireless one. The two are complementary technologies, not competing ones. To have a successful wireless broadband network, you must build it on the back of a fast, high volume fixed network.

The other big issue preventing wireless networks replacing fixed ones is the enormous cost difference between the services, despite the vastly inferior performance.

For example, the largest wireless broadband plan on the Telstra NextG wireless network is 12GB of data for $89.95 per month, where Telstra quote speeds of “between 1.1 and 20Mbps in metropolitan areas, with lower speeds outside metro areas”. (see here) By contrast, on the NBN you can get 20GB of data for $29.95 per month, at a speed of 25Mbps. (see here) For another $9.95, you can add a phoneline with all local and national calls for free.

So it’s possible to have an NBN connection and a phone, free calls, twice as much data at a higher speed, plus a smartphone with a gig or two of data (on a ~$45 mobile plan) for less money than a mobile broadband connection alone.

The ink was barely dry on the sketchy DIDO wireless white paper when the anti-NBN brigade began touting it as something which will imminently make the optical fibre of the NBN obsolete. So what is DIDO?

Well, right now it’s vapourware. There are no technical specifications, detailed explanations or independent tests of the technology, outside the self-published and extremely basic white paper linked to above.

DIDO is a series of grandiose promises from a small startup technology company in the USA, who are trying to raise capital after failing to generate interest in the concept. The promotor claims that the system can overcome one of the limitations of regular wireless technologies, being the massive speed reductions that occur as more users join the network. They claim that the entire capacity of the wireless network can be delivered to each user at the same time. Sounds rather unlikely. Is it just another example of Silicone Valley’s too-good-to-be-true Next Big Things?

You never know though, DIDO might do everything they say it can. But at this stage it’s very much in the early experimental stage. Right now, DIDO has only been tested in a laboratory with 10 users, and outdoors with 3 users. They claim from these tests to be able to scale up to 100 or 1000 users. I’m not kidding. On the basis of claims by a venture capitalist that this technology works in this limited environment, mental giants like Andrew Bolt are declaring the NBN to be dead and buried!

So let’s give DIDO the benefit of the doubt, and assume it can do everything they say it can, what would that mean for the NBN?

So while it’s true that there is huge potential for DIDO if everything they say is accurate, it will be a long, long time before it will be commercially available. So how does this affect the NBN? Should we just sit back and do nothing until this particular Next Big Thing arrives? Then what? Do we then sit around for another 10 years waiting for the next one? Let’s also not forget that it still doesn’t solve some of the biggest problems of wireless communication.

It should come as no surprise then, that no telecommunication engineers or physicists have come out saying DIDO will make the NBN redundant. Even the developer itself only promotes DIDO as a cellular replacement, not a fixed network replacement. That job is left to the usual band of technologically-clueless commentators, who -as always- apparently know better than people who actually possess some qualifications on the topic.